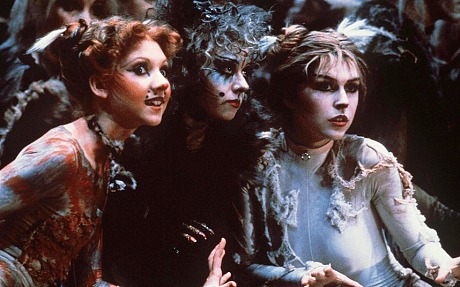 “And so each venture

Is a new beginning, a raid on the inarticulate

In the general mess of imprecision of feeling,

(T.S Eliot, East Coker, No.2 of the Four Quartets)

“So please show me Hackney,
Doesn’t have to be Louis V up on Bond Street,
Just wanna be with you.”

A friend messaged me after I went to see Cats (that is Tom Hooper’s Cats, not a common exhibition of catsor the 1998 direct-to-video adaptation of Cats) asking me what I thought of Cats and for them, I offer this as a lengthy, belated reply.  The world is now irrevocably split between those who have seen Cats and those who have only heard, glimpsed or dreamed of Cats.  The tigers came at night for Cats, at Twelve O’Clock a critical embargo was lifted and, like Stephen Ward, Cats died.  “Regard that Cat”, the critics said, “which flattens itself in the gutter, slips out its tongue, and removes itself from awards contention”.  Yes, Cats, the sunny children’s film powered by the glorious engine of kindness, died, but Cats, the sack of weirdness filled with non-cats, shapes without form, gestures without motion, lives.  I think of Cats as an exquisite corpse and the notion of it instinctively moves me; the notion of some infinitely gentle, infinitely suffering thing.

As a tribute to the genius of Eliot, Cats is ingenious.  One thinks of the nerves of Prufrock when Hooper’s camera, crouched by chivalry, refuses to leer at the dancing cats and blinks away into gawky wide angles (“I have seen them dancing, each to each,” Hooper may say in the Netflix doc, “I do not think they should dance for me”).  Eliot was a master of the refrain, and Jason Derulo, playing the party cat, twice leaps into frame and shouts “let’s party” in separate scenes.  He does not party for long on either occasion, perhaps because he has other, non-Jellicle Balls that he also must attend that evening.  Eliot weaved his professorial entrée into classicism through his greatest modernist work, thus Hooper repurposes the notions of intertextuality by staging “Memory” in exactly the same fashion as he did with “I dreamed a dream”.  Anne Hathaway’s Fantine, as she sings “I dreamed a dream”, is reckoning with the brutality of her circumstances, after poverty has forced her to sell her hair, teeth, and body into the uncaring night.  Jennifer Hudson’s Grizabella, as she sings “Memory”, is reckoning with the brutality of her circumstances, as an estranged cat who has been laboured with the body of an ageing cat.  The two ballads are caught in a forensic Hooper close-up, although in Cats, Hooper delivers on the promise of plurality in the title by having two cats stand indolently behind Jennifer Hudson’s cat.  Those cats, called Leafblouser and Coprophile, were also hoping to win a new life from Judi Dench’s Old Deutoronomy, but never got a chance to campaign with their own Puccini-inspired love song.

I shall not litigate against the inherit badness of Cats, because it is bad from a dozen angles.  The badness of Cats cannot be disassociated from what makes it beautiful; it is beautiful because it is so brazenly, perfectly bad, and made so awful through the patches of light and sentiment that capture Hooper’s mad dash for the sublime.  But the original Cats is awful, too, and quite wonderfully so – it is an emissary of British strangeness, an antidote to good taste; confusing, chintzy, composed entirely without jazz, yet presented with such love and vigour that it kept its audience hypnotised.  The original Cats is a debased ballet for children that somehow outlived its own awfulness, and Hooper’s Cats is principally bad cinema, a morbid collector’s item for the snarkiest of cinephiles.  Cult screenings will be held, in a decade, with sing-a-longs and Q&As with the fifth cat from the back.  An inside story will come from the set of Cats, perhaps in Vanity Fair, perhaps in The Hollywood Reporter, perhaps in a memoir penned by the sixth cat from the back.  Tom Hooper (who has seen his stock grown slightly bald) will next make a safer product, something scaled in and with less colour.  With Cats he entered the imaginarium and built sets where humans would be the size of cats.  He dared to dream and to become that cinematic Achilles; the auteur; the filmmaker who wields their camera with the cheerful ignorance of a young Orson Welles.  But Cats is no Kane nor was meant to be; it has the narrative verve of a potato and is unmistakably kitsch.  Hooper is too arch to shed light on the kitsch, and the mismatch of creative hands to source material is akin to being served Heinz Sandwich Spread on a silver platter.

In the tragedy of Cats there are moments to be unwound, like when a cat sits alone against a streetlamp in a lonely street corner, in a pinkish neon light, and one can see the magic that Hooper sought.  But the magic of this tableau is vanished in the kitsch of power ballads, Jason Derulo and the jumbled words of T.S Eliot flowing into a new song from Taylor Swift.