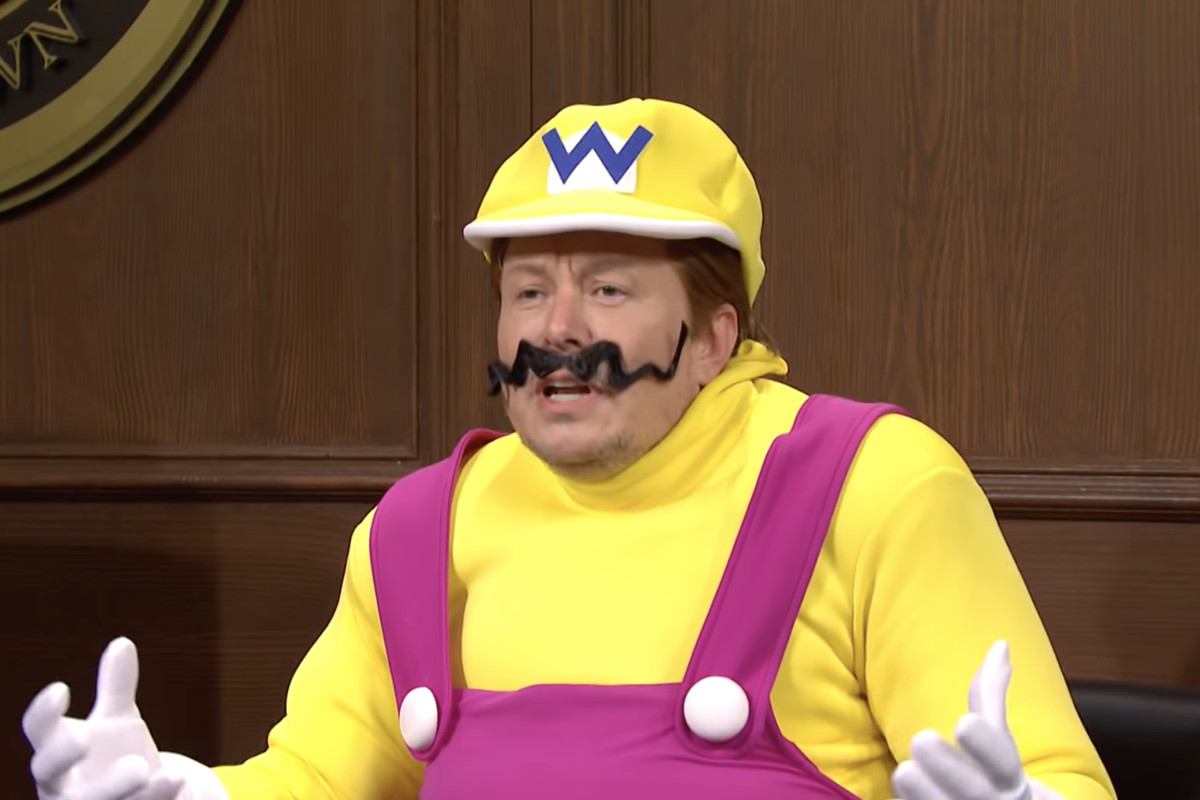 “Cursed,” we mutter hungover to each other as we gaze, full of sleepy dread, at the video on the phone.

“So, so cursed,” we grimace, unable to look away from the sight of a boring Batman impersonator pretending to be funny to a crowd of polite, masked people on live TV.

“I can’t stop thinking about how cursed it was,” over breakfast, as we remember those weirdly massive shoulders lumbering through the tar-like morass.

I was, for a time, a bit obsessed with Elon Musk.

His was a name that recurred frequently in the public discourse, and I’ll admit that for quite a long time I wasn’t entirely sure who he was or what he did, beyond being exorbitantly rich and having a name that was fun to say. I was aware of his relationship with a musician I quite liked, and the fact that together they’d constructed a sort of turbo-capitalist space bubble for themselves which seemed to enrage and amuse people in roughly equal measure.

I spent some time researching him, nominally for a (criminally unperformed) short play I wrote about him, but I think deep down I really wanted to know why so many people hated him so much. On paper he seemed inoffensive enough- a billionaire, admittedly, whose existence proves the total failure of our culture’s economic systems, and whose family wealth was possibly drenched in blood, but aside from that, a tech mogul employing thousands of workers in various fields whom he wouldn’t allow to unionize, BUT ASIDE FROM THAT a would-be starman intent on setting the human race among the spheres, whatever the cost.

A friend remarked that he thought Musk “just wanted to advance the human race”, and from reading a lot of interviews with him it’s hard to argue with that.

Musk’s main problem seemed to be (if, again, you ignore his utterly bizarre social media presence, utterly bizarre presence in general, calling people paedophiles and highly irresponsible views on COVID) that, because he was rich enough, he thought he could, and should, do anything.

As my friend did, I’m sure you could argue that this betrays a sort of idealistic naivete on Musk’s part, a cheerfully gung-ho Superman belief that he alone is the one who can save mankind, that some golden hand has written his name on the door of destiny, and he must do all in his power to open this door, in spite of unions, Twitter and Joe Rogan. And I think Musk genuinely believes this as well.

I disagree, however. And I think the reason people dislike him, and indeed the reason I do, is that the only reason he thinks any of the above is essentially because he is rich. He is the living embodiment of the truism that “just because you can do something doesn’t mean you should”. The planet’s problems cannot be bought off, and no amount of Tony Stark posturing can change that. We have a number of environmental, humanitarian and political crises that urgently require our attention and the attention of our leaders, immediately, and pointing endless, ever more shiny and carbon-belching rockets at Mars seems obtuse to the point of arrogance.

No good can come of telling people that wealth equals morality, or intelligence, or trustworthiness. No good can come of handing over the future of the planet to the highest bidder, just because they’ve got enough money to invent a currency and name it after a meme.

Musk’s problem, it seems to me, is that he sees a price tag on everything- salvation, prestige, cool, humour. And no sooner does he see it than he reaches for his wallet and glances again at the stars.

With the above in mind, I would like to briefly now explain why his appearance on American sketch show Saturday Night Live last Saturdayheralds the beginning of the end of civilisation.

Comedy in and of itself, (indeed art in general) is not something that can or should ever be bought or sold. To clarify, comedians and artists should obviously be paid and the industry must obviously be supported, but what I’m talking about is the actual quality of humour, of being a funny person, or a good artist, or being generally stimulating or interesting to have in the ecosystem. In other words, more money does not mean more funny.

So often it’s the first thing co-opted by the oppressive, the violent and the venal; one thinks of Margaret Thatcher haw-hawing her way through Yes, Minister, Tony Blair asking Catherine Tate if he was bovvered, Jimmy Fallon ruffling a beaming Donald Trump’s hair. If they can trick you into laughing, they’ve got you. If they can make you laugh, that’s a degree towards thinking they’re ok to have around. That they’re normal people. Could someone who watched the same TV as you commit a war crime? Nah course not.

This is the first hurdle at which Elon and SNL fall; the episode is crashingly, scarily un-funny.

It is clear within seconds of his opening monologue that Musk is no comedian, with his self-confessed lack of “intonational variation”, baffling pacing and oddly confrontational posture. He jokes gamely about offending people on Twitter, saying that he’s “sending people to Mars in a rocket ship- did you also think [he’d] be a chill normal dude?”, then proceeding to mug disconcertingly at the camera for eight seconds while the audience whoops. “At what??” one might ask (or I did anyway)- his lack of “chill normality” stretching, evidently, to accusing rescue missions of being staffed by pederasts and repeatedly endangering the position of his own stock by boredly tweeting his every damn idea.

He laughs at his own jokes, he quips about his son’s unpronounceable name, he even brings his mother onstage to wish him luck, and Lord is there something profoundly depressing about watching two spangle-clad, potentially human-labour-funded, billionaires hugging and bantering about childhood bank accounts and whether we live in a simulation. (NB- I should probably mention that the rumours that Elon’s wealth partly came from a family-owned South African emerald mine are inconclusive, but the fact they exist at all is indicative of at least something, I should say).

And in a way I suppose we sort of are living in a simulation- as this opener would seem to suggest, we’re very much citizens of Musk’s world, a world ruled by clean, interplanetary idealism, where you simply mustn’t worry about what anyone’s said on Twitter or any of the boring nitty-gritty, we’re here to have a good time- here’s Miley Cyrus! And hey look! Here’s my ludicrously rich mum in her lovely clothes! I love you, ludicrously rich mum. Where, crucially, all this shit is normal. Where it is normal to watch a billionaire pretending to be a comedian on live TV, where it is normal to be “aww”ing and whooping as he gives his mum a cuddle.

What is going on? How on earth did we get here? Just who do I need to speak to about this?

It really doesn’t get better. There’s a painful skit about a “Gen-Z Hospital”, where everyone, including the doctors, goes around saying “we stan you” and “bestie” (it’s worth noting, however begrudgingly, that not everything awful in this episode is Elon’s fault); there’s a truly horrible sketch where he plays Wario and does a stupid walk and Grimes rocks up for a bit as Princess Peach; there’s a sort of cowboy bit which everyone looks like they’re hating where he has a nice chuckle at his own expense about “electric horses” and not wearing masks; and then he basically plays himself (sorry, Dr Lloyd Ostertag) in the Weekend Update section, where he smirkingly refers to himself as the “Dogefather” (in reference to Dogecoin, a kind of cryptocurrency that his special blessing and is named after a meme, grandpa) and singularly fails to explain what Dogecoin is in any meaningful or comedic way before admitting it’s “a hustle” (a move which caused the cryptocurrency to fall by as much as 35% on Saturday). It’s all lazy, turgid stuff that clearly believes the novelty of Elon Musk’s personality and presence will make up for the lack of anything resembling satire, or hip-ness, or real jokes.

And so on and so forth. Yes it’s badly acted, badly written and no one looks particularly happy. But the reason it’s so immensely bleak is that the whole thing, his jokes about cryptocurrency, his “aren’t I quirky?” shtick, his sporting digs at himself, is an attempt to make us think he has any right to be there. That his presence, the presence of an insanely rich, politically rogue industrialist, on the global stage, on our TV screens, within our entertainment, is a normal thing. And that’s where the danger starts.

SNL has a bad track record with this; Donald Trump hosted in 2015, and then in the run-up to the elections that saw him victorious, they had him portrayed by Alec Baldwin in a series of fairly toothless sketches. And then Donald Trump became president.

Over here, before he became PM, Boris Johnson hosted Have I Got News For You four times, doing the chuckling, bumbling posho bit he now does over piling dead bodies.

It goes without saying that Elon Musk is not quite on a level with the above, not at time of writing anyway. But as said before, there is real danger in implying that money can buy everything, and that it gives anyone the right to be funny, or interesting, or worthy of screen time.

Laughter cannot be bought, and in implying that it can be, a comedy show like SNL runs the risk of kowtowing to a plutocracy that is slowly rendering basically everything meaningless- from our entertainment, to our education, to our democracy.

I’m sure this would be hard for someone like Elon Musk to understand, but comedy is one of those rare things- the more money you spend on it, the less value it has.

“Cursed,” we mutter, hungover, to each other as the fist tightens.

“So, so cursed,” we grimace as the trees rot and the seas dry and the carbon clouds swirl around our ankles.

“I can’t stop thinking about how cursed it was,” as the hand grips our faces and forces our eyes away from the dust we stand on, and up, ever up, towards the cold and distant stars.