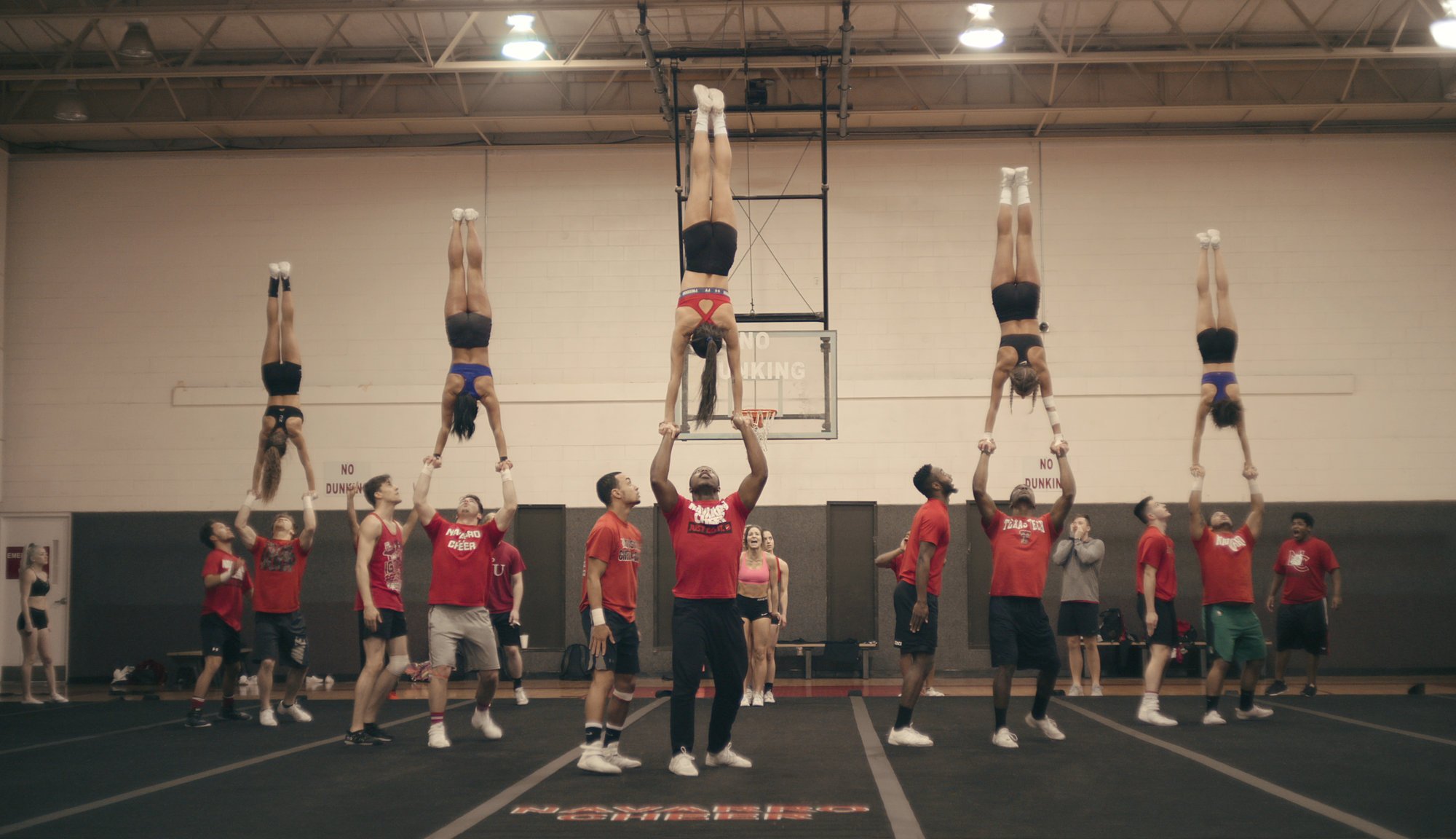 Think you’ve seen enough of these? I don’t think you have! Honestly, I don’t know why you’re complaining. One of the few things I’m able to focus on these days is television’s sweet embrace, and the pleasure of re-watching old favourites is like a warm, electronic blanket. However, if you find yourself unable to meet the minimum requirements that TV demands of your brain, it’s nice to have something on in the background. A soft, murmuring accompaniment to your existential dread, if you will. Anyway, here is the television I’ve been binging in the last six weeks. Thank me after you’ve seen Cheer.

I approached this show in the same way that I imagine many others before me have. Low expectations. Like many other family-oriented sitcoms that air on Netflix (Grace and Frankie, Good Girls, Friends from College, the list is very long and I won’t bore you), I have been personally let down by the calibre of humour and quality of acting. Not this time. I don’t know if something is in the air just now, but there’s something about Schitt’s Creek and the Rose family that hikes up my endorphins, unlike anything else since I first watched Parks and Recreation or The Office. Created by and starring Canadian father-son duo Eugene and Dan Levy, it follows the Roses, a wealthy family from New York City. Ejected from their life of fortune and happiness due to financial embezzlement, they find themselves living in the unknown town of Schitt’s Creek. It’s the delicious kind of non-intrusive, play-it-in-the-background-until-you-realise-that-its-absolutely-genuis comedies. Serendipitously, you can read a much more detailed look at Schitt’s Creek right on this very website, here, which says it better than I ever could. All I have left to say is, that if you stop reading this article due to your probably shot attention span, then just do one thing, and watch the first season of this show.I don’t know if I will have many happy memories from my time in isolation, but if I do, it’ll have been discovering this. The sixth and final season comes out in the UK on May 14th.

The Wire is something you will never have the chance to watch again. Quite literally, it has taken up so many of my evenings, required so much attention to yield its hidden enjoyment, that I know I would have given up episodes ago had I not been literally trapped in my living room. It aired between 2002-2008 and has widely been considered The Greatest Television Series Ever Made. It revolves around the Baltimore Police Department, which employs two very young versions of Dominic West and Wendell Pierce, who season by season take on drug lord wrongdoers in dramatic fashion, accompanied by their trusty wiretapping methods. Idris Elba plays the pleasingly named Stringer Bell, the sulky leader of these drug lords, along with other interestingly named figures such as Cheese. In all seriousness, for something written over 20 years ago, The Wire predates other cop TV shows that are desperate to appear as ‘woke’. (Brooklyn Nine-Nine) It is rare to see a show primarily revolving around American gangs that also removes its African-American characters from archetypal roles of drug dealers and addicts, also showing them in roles typically occupied by white actors – such as lawyers, heads of department and other positions of authority. There’s a significant amount of LGBT representation, as well as interesting comments on police and prison violence. The Wire is something you may have a love-hate relationship with, as I very much do. The episodes are densely packed, with dialogue that moves an alarming pace whilst seeming to not achieve very much. The amount of characters is necessary but completely infuriating. But occasionally, and usually in the form of West’s Jimmy McNulty, The Wire doles out a spectacular televisual moment, which opens your tired eyes and revives your faith in this marathon narrative. If you are willing to dedicate your hours then you will see why it occupies its worthy position at the top of the table.

Chewing Gum is a hidden treasure, tucked away in the box set pages of All4. Written originally as a one-woman play by Michaela Coel, who stars as Tracey Gordon, it follows her life on a housing estate in London. Raised in a devoutly Christian household, Tracey yearns to learn more about the world of men, and more importantly, sex with those men. There are looks to camera aplenty, awkward relationships with family members, and an unabashed discussion of female pleasure and sex. Is this all sounding familiar? Correct. It’s the original Fleabag. It is Fleabag for people that love Fleabag, but get annoyed at Fleabag’s incessant middle-classness, or for whom the fact that Phoebe Waller-Bridge descends from a Lord sometimes doesn’t sit right. It is self-conscious about Tracey’s class position and her lack of money, but allows itself to develop further than this, ultimately avoiding stereotype. Interiorised representations of black, British women are rare on our screens, and Chewing Gum deals with issues of poverty, Britishness and female sexuality with a comic and subversive voice. So next time you hear someone proclaim the great invention of PWB’s Fleabag, you can rightfully point them in the direction of Chewing Gum. S1 & 2 streaming on All 4.

A gift to this earth. A present from the heavens. A heartening joy from start to finish. Cheer will lift you out of your socially distanced slump and make you keenly aware of your dormant obsession with cheerleading. It creates an indignant voice in your head that cries ‘why isn’t cheerleading a recognised sport? Why is there no upward mobility past college level? Her legs aren’t strong enough to tumble!’ Monica Aldama leads her troupe of Navarro college cheerleaders through national competitions year upon year, and manages to hold onto the title of World Champion most times. In essence, she is a sports coach, but the series depicts her as more of a Jesus-like saviour figure. She stands beside the mat, in heels, a white chiffon shirt, and skinny jeans, barking her demands at college students, who are only there to be on the team, and join the worshipping crowd who kneel at Monica’s feet. The heart of Cheer lies in the community and love that is shared between those on the team, and their collective faith in themselves. The documentary shines a light on both the unappreciated skill and sportsmanship of cheerleaders who defy the limits of gravity and their own body in a staggering manner. It removes the stereotypes that exist around college cheerleading, and treats it with the same sincerity as people do college football. And as someone who has a less than remote interest in any type of team sport, I can truly say I am a convert to the Church of Monica.

Inspired by the Murdochs, Succession centres on the fictional Roy family of New York. The two series follow patriarch Logan Roy’s various despicable offspring who grapple for power in their father’s media empire. The pendulum of power swings between them episode by episode, as do our sympathies for each character. Watch it for the nauseating displays of wealth, manifested in distasteful mansions and cardigans. Watch it because Macaulay Culkin’s younger, and now more successful brother, Kieran, is a standout as the conniving Roman Roy. Watch it because Jeremy Strong’s Kendall Roy is Shakespearean in his tragic position as the disappointing heir to his father’s throne. It will confirm to you that, basically, rich people are the worst, but make incredible television.

Apple TV has so far, not been heralded as Netflix’s great rival. It has even been dubbed a complete flop. But, if you have purchased a new Apple product in the last few months, you are generously rewarded a year’s free subscription to Apple TV. This is how you might know about The Morning Show. It is, at first glance, an extremely expensive looking series which stars Jennifer Aniston, Reese Witherspoon, and Steve Carrell. Good start. It follows the fallout at The Morning Show when Mitch Kessler (Steve Carrell) is exiled from his position as anchor due to sexual harassment claims, and replaced with Bradley Jackson (Reese Witherspoon). If you have seen the film Bombshell, this a pretty similar idea, but gives complexity to the subject in a way that the film does not. Instead of pinning the blame on one person as in Bombshell, TMS tackles sexual harassment in a more nuanced manner. It educates its audience about how seeds of power are sown into every corporate level and how this power can be abused by more than one person through inaction and silence. It is not only the men in positions of total power who are complicit, but the internalised misogyny of many that contributes to a dangerous working environment. The episodes are addictive, watchable, at times funny, and generally just quality television that doesn’t feel self-conscious of its A-List cast, and they gel together naturally on screen. Jennifer Aniston won a Screen Actors Guild Award for her portrayal of Alex Levy, which is truly deserved. We know that Reese Witherspoon is fantastic on television (see Big Little Lies), and we know that Steve Carrell can easily raise the quality of a show (although this time with refreshing amounts of seriousness). But Jennifer Aniston, who after Friends was relegated to B-list romantic comedies and one too many on-screen partnerships with Adam Sandler, has finally been given a role that could overshadow Rachel.

Not strictly television, but if your eyes are feeling like they are becoming perpetually square shaped after watching all the above recommendations, then try this. Currently being recorded in respective bedroom closets, The Office Ladies is hosted by Jenna Fischer and Angela Kinsey who play Pam and Angela on The Office (US). Each episode of the podcast corresponds with a detailed analysis of each episode of the show. The pair give facts and anecdotes about the episode, as well as information about the television production process in general. If you have a less than intense zeal for The Office, the podcast speaks in equal measure about working on an American sitcom (something I now dream of). But if you are a fan, and are perhaps religiously re-watching it right now, this podcast is a necessary accompaniment to your days. On my walks, I listen to the dizzying positivity that radiates from these two women. They are best friends, as they like to remind their audience, constantly praising each other’s beauty, intelligence and humour. The positivity and love Jenna and Angela have for each other radiates throughout their discussion of the Office, halcyon days for two actors who have sadly not had many other significant roles in television. Listeners will join them in weepy sentiments about their ex-colleagues, who appear as guests on the podcast. We are yet to see Steve Carrell appear, but hopefully with the continuation of lockdown, he won’t have much else to do.

One thought on “This Year in Television: Six (and a half) shows to watch in Lockdown”